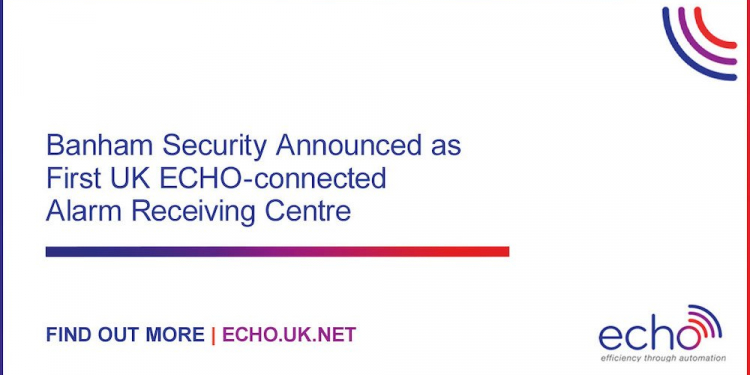 By switching from traditional telephone communication between individual ARCs and Police Control Rooms, to an ECHO-connected process, police response times can reportedly be improved by as much as four minutes, a more efficient and effective deployment of Police resources to alarmed premises.

Domestic and commercial users of NSI and SSAIB approved installers and their professionally installed alarm systems, can benefit from ECHO as Police Forces and ARCs around the UK get ECHO-connected during 2021.

“Banham is delighted to be the first ECHO-connected Alarm Receiving Centre in the UK,” said Martin Herbert, Managing Director, Banham Security. “This is an exciting moment, not only for Banham, but for the entire UK security industry. ECHO’s new technology has allowed us to transform the way our industry responds to alarm activations by rapidly reducing response times, providing support for the Police and giving additional peace of mind to our customers.

“It has been a privilege to have worked in partnership with ECHO in achieving successful end to end testing of this ground-breaking technology at our in-house Alarm Receiving Centre in South West London.

Martin Harvey, Director, ECHO, commented “We are incredibly grateful to Banham for their support and assistance in the development of the ECHO concept over the last 3 or more years and welcome them as the first ECHO-connected UK Alarm Receiving Centre. The ECHO initiative is a shining example of how collaboration between the Police and the professional private security industry, when motivated to work together, can deliver significant and tangible benefits for all.”