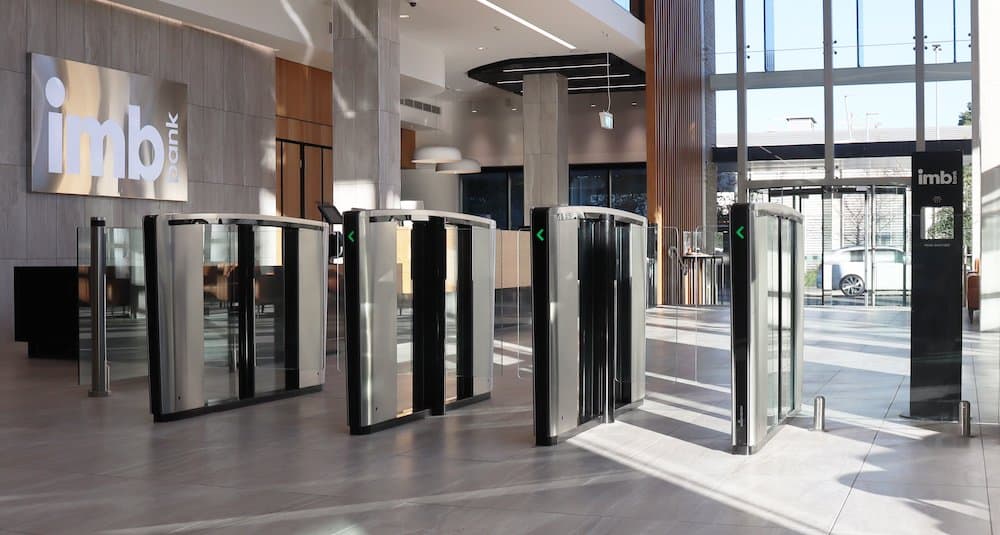 Boon Edam has announced that IMB Bank in Australia has installed a series of Boon Edam entrances, including all glass revolving doors, slimline optical turnstiles and a swinging access gate at its new building in Wollongong, New South Wales.

IMB moved into the new building in early 2021, and immediately sought to make the entrance open and welcoming to visitors, with entrance security inside to protect valuable data, intellectual property and people. The exterior of the building has two Boon Edam Crystal TQ all-glass revolving doors, while in the main lobby are three Speedlane Lifeline Swing optical turnstiles, including one wide lane suitable for disabled access. In another interior location, there is also a Winglock Swing access gate that separates off a designated meeting space.

“After reviewing a range of product proposals, we found that Boon Edam’s range had the ideal combination of aesthetics and security that IMB was seeking,” said IMB Head of Facilities, Greg Dowd. “The security turnstiles give us greater control over access to the building, and they alert us to any tailgating or access breaches. Limiting access to only authorised personnel not only protects our staff, but it also protects the data of our customers, which we always store securely. As a further advantage, the Boon Edam team integrated the access control system with our RFID (Radio-Frequency Identification) system. This was a big help, because it meant the turnstiles were sending data directly to our existing system,” said Dowd.

The Managing Director for Boon Edam’s Australia subsidiary, Michael Fisher, says this impressive project will serve as a new benchmark for local financial institutions. “IMB has set the bar high with its new Wollongong facility. Every design element has been carefully thought out to be welcoming to visitors and intuitive to employees. We are delighted to have been selected to contribute to the success of this project. Boon Edam is a family-owned organisation with a history extending back nearly 150 years, so it is particularly satisfying to work with a community-minded company like IMB, with a similarly long and successful history,” said Fisher.

“The Boon Edam team was highly professional to work with and responded adaptively to our needs. Early mornings were the best time for installation work, and their service team accommodated this need right from the start, without a hassle. It was clear that Boon Edam takes great care in its products, and that its values as a company were aligned with IMB’s, which are strongly focused on community, family and quality,” Dowd added.