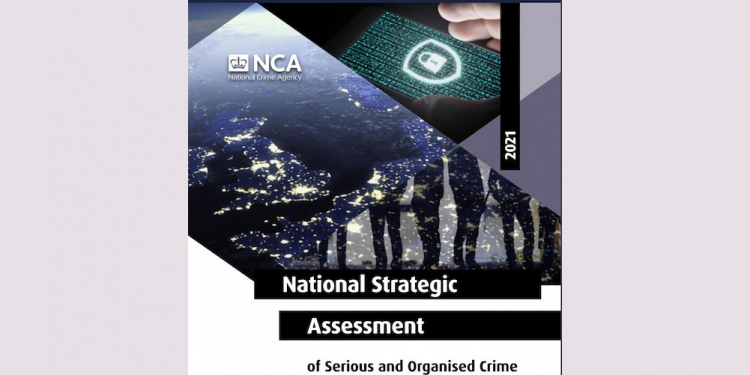 Criminals are exploiting advances in technology to drive serious and organised crime, the NCA says in the 2021 National Strategic Assessment, with increased online usage leading to a rise in offending.

The National Crime Agency (NCA) has released the 2021 National Strategic Assessment (NSA) of Serious and Organised Crime, utilising intelligence across law enforcement, government, the third sector and private industry to set out the UK’s understanding of the threat posed by organised criminals.

The NSA sets out the threat that organised crime poses to the UK, such as; the smuggling and distribution of guns and drugs; the sexual abuse of children; cross border trafficking and smuggling of people; exploitation of individuals; industrial scale frauds; ransomware attacks and the laundering of dirty money in and through the UK which are causing harm to communities on a significant scale.

The past year has seen huge changes in UK society: Covid-19 has changed the landscape and the NSA highlights that organised criminals have adapted their methods to survive. In particular, offenders have turned to online spaces, increasingly using emerging technologies to commit crimes at scale and avoid detection.

“The National Crime Agency, together with our operational partners, is disrupting more and more serious and organised criminality,” said NCA Director General Dame Lynne Owens. “But as our latest assessment shows, the threat to the UK from crime groups supplying drugs and firearms, trafficking vulnerable people, defrauding individuals and businesses, and from cyber criminals and child abusers, has proved resilient, including during the pandemic. Covid has shown these criminals for what they are – corrupt and exploitative.”

Ransomware attacks have increased in frequency and impact. It is estimated 50% of all ransomware attacks included a threat to publish stolen data and over the last year there were £3bn of estimated fraud losses for UK individuals and businesses, but an accurate figure is constrained by significant under-reporting.

The dark web remained a market where large numbers of offenders traded illegal commodities such as firearms and drugs and offenders have increasingly turned to both specialist and commercially available encryption tools to hide their communications. Criminals increasingly used cryptocurrencies to facilitate money laundering, at least in part because the pandemic made it harder to move cash.

Criminals continue to use technology to exploit children at scale. Online exploitation has been shown to enable offending in the real world, with the online grooming of children leading to physical abuse and the large scale blackmailing of children to abuse themselves. The assessment concludes that despite significant operational and policy responses, the child sexual abuse threat continues to grow, exacerbated by rising online activity.

The Director General continued: “This year’s NSA shows how criminal exploitation of technology is central to the threat. For law enforcement, the frontline must now be online, as well as on our streets. Whether in the real world or online, the NCA will continue to identify and pursue the criminals who pose the biggest risks to our families, communities, the integrity of the state, and its prosperity. No one involved in serious and organised crime in the UK should consider themselves beyond our reach.”

This year, the NSA includes an update on the numbers of individuals involved in organised crime in the UK. The latest assessment shows that a minimum of 69,281 individuals in the UK are involved in SOC across all threats except child sexual abuse.

Additionally, the assessment estimates there to be between 550,000 and 850,000 people in the UK who pose varying forms of sexual risk to children. This range, which is not comparable with last year’s figure, was calculated using a new, exploratory methodology following the NCA’s commitment in 2020 to evolve its understanding of the number of offenders.

The Director General concluded: “Over the next year the NCA will continue to adapt: embracing ever stronger collaboration with partners, employing innovative approaches to intelligence collection and deploying our full range of capabilities to disrupt high-harm criminality impacting on the UK.

“But while the NCA will continue to lead the fight to cut serious and organised crime, it is imperative that technology and social media companies match this intensity, building in safety by design and closing down all avenues for offenders to exploit their platforms. In particular, we must move to a place of zero tolerance for the presence of such material online in order to raise the bar to offending and, most importantly, protect children.”