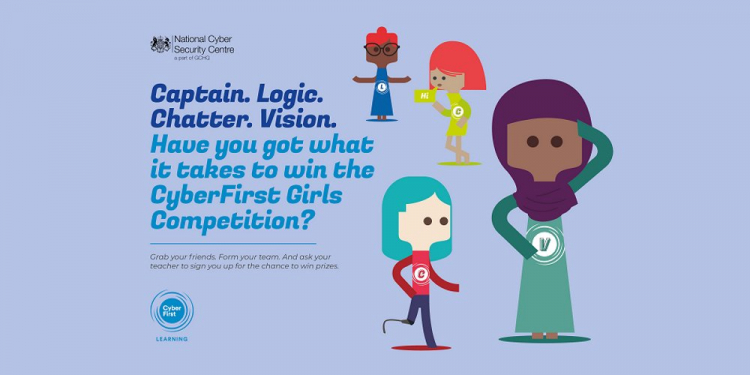 First-time entrants are being encouraged to register for the new-look CyberFirst Girls Competition 2022, run by the National Cyber Security Centre (NCSC) – a part of GCHQ. The annual competition, which sets teams of girls aged 12 to 13 a series of cyber-related challenges, has already introduced thousands of girls to the world of cyber security, which is a growing industry but where females are currently under-represented.

For next year’s competition there will be 13 finals held across the UK, rather than one UK final, as organisers seek to encourage more schools to take part that have never done so before. Hundreds of schools have already signed up – including more than 25% that have never entered before – ahead of the qualifying round which begins on Monday 29 November. It will see girls tackle puzzles covering topics from cryptography to AI to logic in a bid to score points.

“We’re really excited to be launching this new-look CyberFirst Girls Competition, which aims to tap into the talent we know is out there across the UK,” saidChris Ensor, NCSC Deputy Director for Cyber Growth. “Cyber security is an exciting industry with great opportunities, but female representation is currently too low, and the competition is a fun way for girls to be introduced to the subject. It’s great to see so many new entrants already coming forward, and with registration still open we encourage even more – whatever their experience of cyber – to sign up and see where it takes them.”

Now in its sixth year, the CyberFirst Girls Competition aims to inspire more girls to consider careers in cyber security and improve diversity in the industry – as women are still under-represented, accounting for just 16% of the UK’s cyber sector workforce. The CyberFirst Girls Competition is the NCSC’s flagship cyber security event for schools, and since 2017 more than 43,000 girls have taken part. The contest is open to pupils who identify as female in Year 8 in England and Wales, S2 in Scotland, and Year 9 in Northern Ireland.

This year sees some new changes to the competition format:

A teacher or school guardian must act as team mentor and register teams via the NCSC website, where more details about the contest and the full 2022 rules are available.