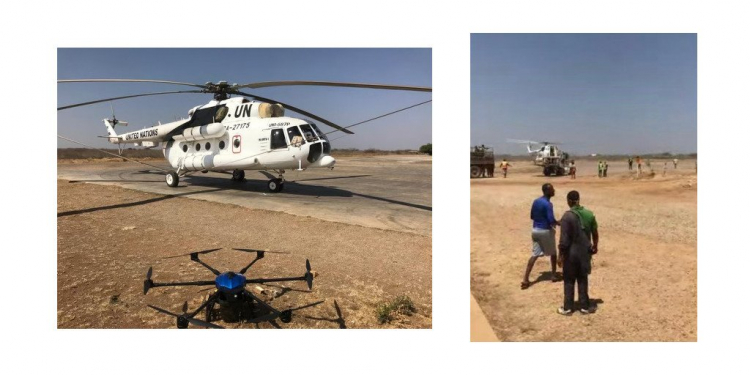 Plymouth Rock Technologies believes it has broken the record for beyond visual line of sight (BVLOS) drone delivery and set a new record for complete ‘round trip’ autonomous delivery capability as part of its work on the United Nations mission in Somalia. On February 10, 2021, between 09.00 and 09.30 ZULU, a PRT delivery drone, in service with the UN, delivered a 6.5kg agricultural load in a 22.20km round trip flight in Somalia.

The mission was completed in 30 minutes, with the drone flying outbound into a 35km headwind, at an average flying height of 400ft. The drone took off, reached its destination, dispatched its cargo precisely and returned to its launch area with no pilot intervention or requirement to stop and change a battery. The manufacturer states that the flight and mission have been repeated multiple times since the above date. UN observers and aviation officials that monitor scheduled UN flights have agreed to supply the recorded flight data and witness statements required for the official recognition by Guinness adjudicators.

The existing official world record was set at 34 minutes in China on September 12, 2019 when a DJI M600 drone flew a 2.25kg bedding quilt, packed within an aerodynamic box was flown 16.597km in Shanghai. The average flight height was 85ft (25m). This record included a stop and land halfway to swap batteries.

“The flight data and mission particulars by any measure put the performance capabilities of our most basic UAV platform far beyond the commercial deliverables of the prior record holder’s drone,” stated Carl Cagliarini, Co-Founder and Chief Strategy Officer. “At PRT, we don’t exist to break records. We are here to apply our ingenuity to deliver outcomes that make PRT the obvious choice for professional entities that need successful, immediate results. Prior to this operational development, PRT have been in communication with large internet-based enterprises and military and space aircraft companies. They both require a ubiquitous sub-25Kg drone that can perform autonomous tasks over distance and deliver. This UN mission achievement now demonstrates a capability that removes a great deal of risk to assist their decisions.”

“As a CEO, I am deeply proud of this achievement,” added Dana Wheeler, Co-Founder and CEO of PRT. “This mission deliverable in Somalia will resonate throughout the UN and the many organisations and programmes that will require precise unmanned delivery and mission critical autonomous utility aircraft. The news that Plymouth Rock Technologies has technically outperformed the capabilities and endurance of the largest Chinese commercial drone vendor is not only a huge accomplishment for PRT, but a significant advance for the US.aviation sector as a whole.”