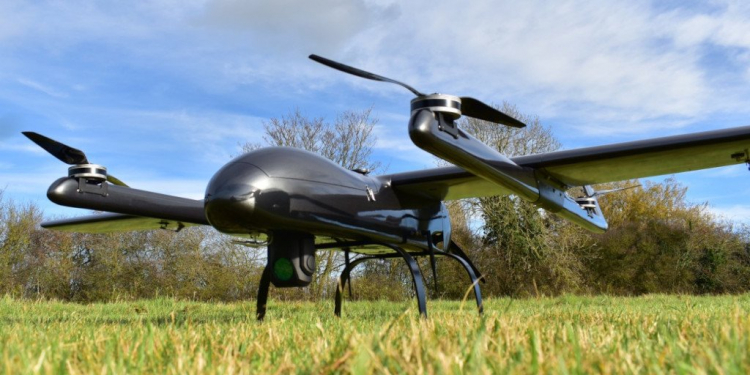 The PRT XV-S is a fixed-wing UAS platform with the added capability of vertical take-off and landing (VTOL). This capability removes the requirement for a large runway or launch catapult and recovery nets, which are usually required by most fixed-wing drones. The XV-S can launch fully autonomously from an area as small as 100 square feet and operate for up to 4 hours.

The XV-S utilises hybrid propulsion and long-range data communications. The XV range is reportedly the first non-military commercial UAS in this class with both line of sight (LOS) and beyond visual line of sight (BVLOS) UAS platforms that offer full autonomous flight capabilities.

The platform will have a 360˚ 4K UHD recording capability option, positioning the XV-S for use by law enforcement, border patrol and search and rescue. The platform will also deliver a less labour intensive alternative for rapid response military surveillance, on land and at sea.

“The technology used within this platform is at the leading edge of UAS technologies,” stated Carl Cagliarini, Co-Founder and Chief Strategy Officer at PRT. “With a fully autonomous BVLOS capability, the XV-S has an operational round trip flight time of up to 4 hours. This would allow a search capability of over 1,500 square miles. Another key operational benefit is that the XV-S can be easily landed on a small naval vessel, refuelled and redeployed in minutes. From coast guard and mountain rescue, through to border patrol and surveillance operations, our XV-S offers a new capability that is unrivalled as a commercial offering.”

“The key to success in the UAS space is simplicity, capability and affordability,” added Dana Wheeler, Co-Founder and CEO of PRT. “During the California fire season, under state of emergency, the US Air Force are often requested to mobilise their MQ-9 military drones to assist with situational overview. This is a very costly and complex way of keeping an eye on a well-established and understood issue. We believe that our rapidly deployable UAS platform will be a highly sought-after tool across multiple US Agencies. We are already addressing inquiries from overseas for monitoring of fishery violations and also humanitarian missions. We will be placing our XV-S UAS on the US Government GSA Schedule so that procurement of this system is streamlined for US Government agencies that wish to order them.”