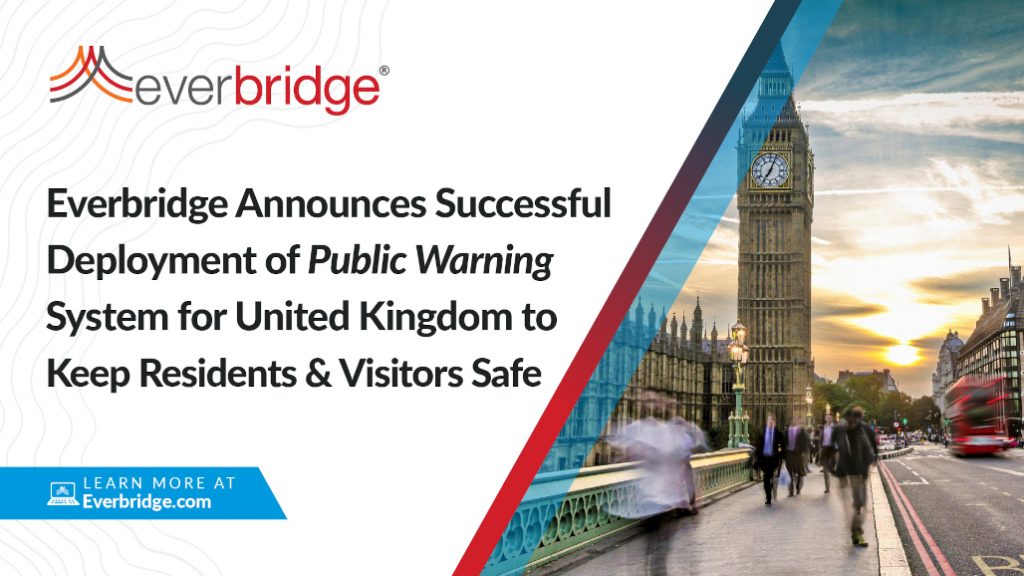 Everbridge has successfully deployed its Public Warning Cell Broadcast technology within three of the largest Mobile Network Operators in the UK. This forms a key technology component of the UK Government’s first-ever nationwide emergency alerting system, planned for rollout later in 2021.

The system allows the government to reach people quickly during national emergencies such as public health crises, terror attacks, industrial incidents, earthquakes and flooding. Powered by Everbridge’s Public Warning technology, the UK Emergency Alert system will target mobile phones of residents and visitors present in the area impacted by an emergency. Everbridge contracts with mobile network operators EE – part of the British Telecommunications (BT Group), O2 and Three represent the majority of UK mobile subscribers, and a population of over 65 million residents and 35 million annual visitors.

“The Emergency Alerts service will be a vital tool in helping us to better respond to emergencies, both nationally and locally,” explained UK Paymaster General Penny Mordaunt. “The concept was used to good effect during the pandemic when we asked people, via text message, to stay at home to protect the NHS and save lives. This new system builds on that capability and will allow us to more quickly and effectively get life-saving messages to people across the UK.”

Everbridge Public Warning, in partnership with three of the country’s largest mobile network operators, was used to complete two recent successful UK trials, the first in East Suffolk, the second in Reading. In the midst of the Covid-19 pandemic, Everbridge deployed the emergency alert system in under 100 days.

“The UK Government presented a challenge to deploy Cell Broadcast technology in a short timeframe in response to the coronavirus outbreak,” said Nazirali Rajvani, Director of Architecture, Solutions & Analysis at British Telecommunications. “We partnered with Everbridge to provide a trusted and proven world-class solution which was already in use in several other countries.”

“We are pleased to be part of this important milestone and support the United Kingdom on the evolution of its national warning system,” said Valerie Risk, Vice President of Public Warning Solutions at Everbridge. “Every nation can benefit from a modern platform that reaches all citizens in times of crisis. Our Public Warning solution enables government organisations to immediately connect with every person in an affected area during a critical event regardless of nationality, residency or mobile handset type.”

Everbridge Public Warning leverages existing telecom infrastructure, with no opt-in required, to reach everyone within a geographic area to reduce disaster risk, support first responder communications, and analyse disaster communication effectiveness for subsequent mitigation activities. The platform is fully compliant with data privacy regulations including GDPR and allows public safety agencies to send an alert to any device within a few seconds without sharing any personal details, such as names or phone numbers.