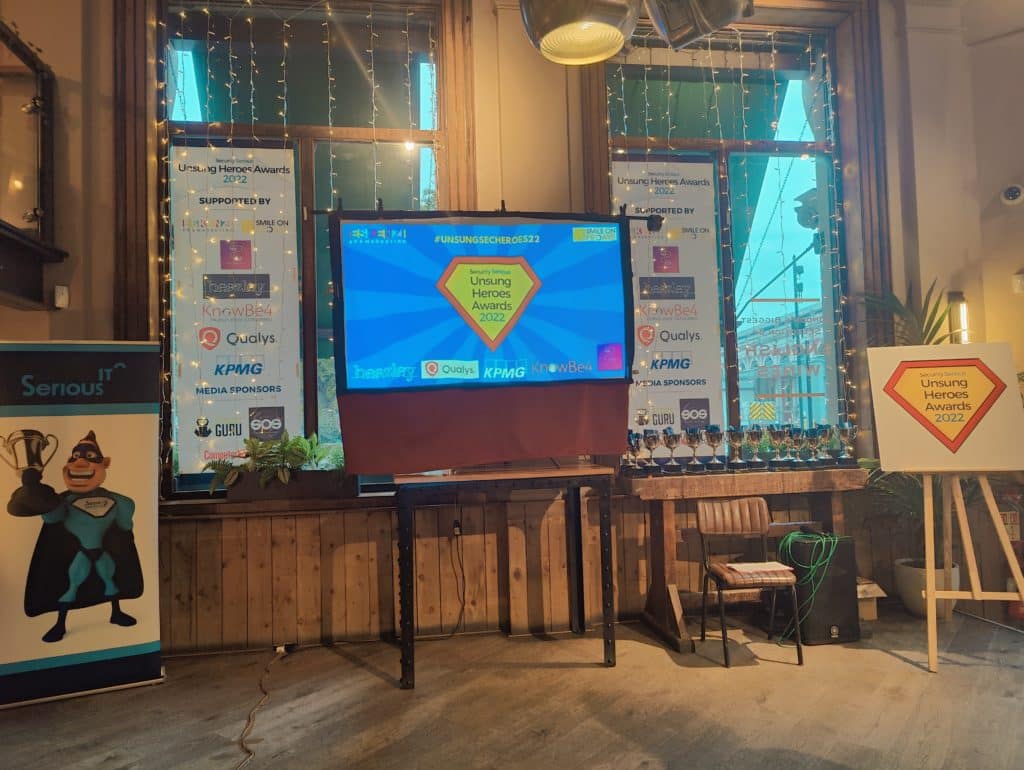 The seventh annual Security Serious Unsung Heroes Awards winners were announced last night during a celebration at Balfour St Bart’s in London. The annual awards celebrate the people, not products, of the cyber security industry. From the best ethical hackers, rising stars and educators to the best security awareness campaign, security team and the coveted Godparent of security, the categories recognised individuals and teams working hard to protect Britain from cybercrime and raise awareness of security issues. This year also saw two new categories added to recognise those leading the way in diversity and wellbeing in cybersecurity.

The event was organised by Eskenzi PR and sponsored by Beazley, KnowBe4, KPMG, Qualys and the Zensory and offered attendees a chance to catch up with familiar faces and meet new ones while enjoying a short awards ceremony compered by Clive Room, director of Pulse Conferences who brought his unique flair to the evening. The winners were branded with titles such as Security Avengers, Data Guardian and Security Leader/Mentor as well as awarded substantial trophies they can display proudly at home or at work.

“The Security Serious Unsung Heroes Awards offer such an authentic peer review…what a privilege to be counted! And what an inspiration to gather with such humanity,” Professor Danny Dresner from the University of Manchester said of his win in the Best Educator category.

“It was a great night and lovely to meet so many other security heroes who do extraordinary things every day to protect our information and keep us safe.”

Winner of the new category of Diversity Champion, Holly Foxcroft, Head of Neurodiversity in Cyber Research and Consulting at Stott and May Consulting said: “Driving for change to be neuroinclusive and supporting the neurominority community really is my passion. Winning the award for me is shining a light that mine and other neuroinclusive supporters’ work, is really being recognised in the field of diversity and cyber. It was an honour to be in the company of so many inspirational cyber professionals – the room was buzzing! We are such a passionate industry; the event really focusses on the individual efforts of our community – the unsung heroes!”

Ed Tucker, senior director of cybersecurity at The Workshop, took home the coveted prize of Godparent of Security. A humble winner, he said he owes his success to the people surrounding him: “I’ve been a long-time admirer of the Unsung Heroes Awards and the thoroughly deserved peer recognition it champions! To even be considered for such an accolade is frankly humbling, but to receive the award is amazing. Any personal accolade is more a reflection on the fabulous people I’ve worked with along the way, who have enabled me to achieve any success. To them especially I owe a huge debt of thanks.”

The Security Serious Unsung Heroes Awards, started by Eskenzi PR, Smile on Fridays and the IT Security Guru, are supported by sponsors KnowBe4, Beazley, KPMG, Qualys and the Zensory who all made it possible to hold this totally free event. The judges included Oliver Pickup, award-winning writer; Shan Lee, CISO of DocPlanner; the People Hacker, Jenny Radcliffe and Yvonne Eskenzi, director at Eskenzi PR.

“Cybersecurity is often one of those thankless tasks that goes largely unnoticed when it’s going well and then it’s all anyone can talk about when it goes wrong,” said lead organiser of Security Serious Week and co-founder of Eskenzi PR, Yvonne Eskenzi. “By hosting this event, we are bringing recognition to those doing a wonderful job with openness and transparency, working hard behind the scenes to protect organisations from the threat of cybercrime. Thanks to our incredible sponsors, we can put on this free event to acknowledge all the amazingly talented people who make this industry so fantastic!”

For more information, to speak to any of the winners or to register your interest for next year, please contact: beth@eskenzipr.com