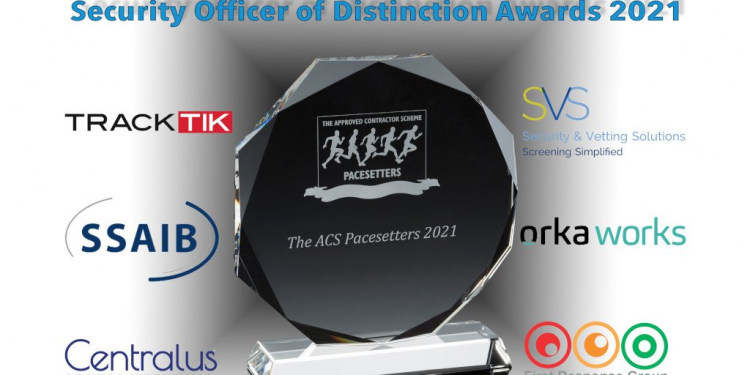 SSAIB are sponsoring this year’s ACS Pacesetters Security Officer of Distinction Awards. The 2021 ceremony will take place on June 16, 2021 and SSAIB are one of six sponsors announced for the awards, which will be the seventh occasion that the exceptional actions of on-duty front-line security staff have been celebrated.

Along with the other five sponsors – Centralus, First Response Group Ltd, Orka Works, Security & Vetting Solutions Ltd and Tracktik – SSAIB will also put their name to two Security Officer of Distinction Awards, which will be handed out to officers who have gone above and beyond for both their employer and the client to whom they are contracted.

“We are thrilled to be able to throw our support behind the 2021 ACS Pacesetters Security Officer of Distinction Awards,” said SSAIB chief executive Alex Carmichael. “With SSAIB being one of the UKAS-accredited certification bodies that offers the SIA’s Approved Contractors Scheme (ACS), we see first-hand the outstanding work that security services personnel do on a day-to-day basis and it is great that an awards event such as this exists – in order to give them industry recognition and reward them for their exceptional efforts.”

Nominations for the 2021 ACS Pacesetters Awards can be made up until the closing date of March 26, 2021 and a copy of the nomination form can be downloaded from the ACS Pacesetters’ website.